Government’s promise to provide final year Junior High School(JHS) pupils, teachers, and staff of the schools with one hot meal a day started on Monday with some pupils expressing gratitude to President Nana Addo Dankwa Akufo-Addo.

The initiative, expected to last for the next 20 days will benefit about 584,000 pupils and 146,000 teachers in about 17,440 private and public JHS schools across the country.

President Akufo-Addo announced the initiative in his 15th update on the country’s response to the Coronavirus pandemic.

He said the decision was based on reports that some pupils were going hungry in schools due to compliance with the COVID-19 protocols.

At the Genuine International School (GIS), a private JHS at Ablekuma Oduman, in the Ga West Municipal Assembly in the Greater Accra Region, about 40 pupils, and their teachers were served plain rice with stew and boiled egg with a sachet of water at 1220 hours.

Margaret Afum, a final year JHS pupil thanked the President for the free meal, saying “this meal will help me stay in school and study for extra hours even after our lesson period.”

She said the intervention was timely because they would gain extra energy to prepare well for the final examination.

Mr Amos Akpah, a teacher in the School lauded the President for fulfilling his promise and prayed that the meals be delivered on time.

At the Nii Kodjo Ababioo Basic School at Mamprobi in the Ablekuma South, Sub-Metro of the Accra Metropolitan Assembly, Mr Kwame Nkrumah, a teacher at the School also commended the President for the foresight and said many more pupils reported to school because of the free lunch.

He appealed to Government to consider the menu, which he said had an egg for all the days.

‘‘Eggs for the students, fine, but we, the teachers cannot take eggs every day because of our age,’’ he said.

Mr Ben Nyavor, a teacher at the Mamprobi Evangelical Presbyterian Basic School, a Private school in the Metropolis also applauded Government and said the quantity and taste of the food was good.

A pupil in the School said they were not allowed to leave the School premises before closing hours and said with smiles, “the daily meals came at the right time.”

Posted by Mlimore - May 6, 2019 0
Professor Ben Hoenyenugah, the Vice Chancellor of the Ho Technical University (HTU), has described the University as the “headquarters” of…

Posted by Mlimore - March 7, 2020 0
The Assin South Directorate of the Ghana Education Service (GES) has cautioned adolescent girls to refrain from running errands at… 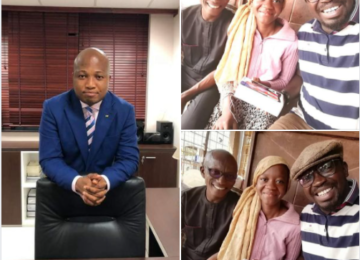 Posted by Mlimore - January 20, 2021 0
Viral post on Facebook of little Ilham who had passed her WASSCE and gotten admission to pursue a Medical course…