A total of 3,899 Junior High School final year students in Tema on Monday, enjoyed government’s ‘one hot meal a day’ as announced by the President in his 15th COVID 19 address.

Out of the number, 2195 were pupils from the 27 basic schools in the Metropolis while1704 were from the 67 private schools.

The pupils were served jollof rice and one boiled egg packed in a takeaway container with a plastic spoon and one sachet water strapped to it as the feeding project started Monday August 24, 2020, terminating September 18th.

The Ghana News Agency observed that while some of the schools had real rich jollof rice, others were served coloured rice, raising eye brows among school administrators.

At the Deks Preparatory School, the headteacher showed a sample of the half-packed red coloured rice with an unpeeled egg for the 50 pupils and four teachers of the school.

Mrs Sonia Niaku, head teacher of Deks, described the food as poor both in quality and quantity and questioned the rationale for putting an unpeeled egg on cooked food.

She appealed to the coordinators of the project to ensure that quality and healthy foods were served to protect students from. food borne diseases.

At the Community Eight Number Two school, all 89 pupils received their food which was well cooked and packed however, the number of portions were inadequate.

Miss Celestine Sabi and Master Frank Ofori Kuma pupils of Community Eight Number two, expressed joy at benefitting from the initiative, saying hitherto some of their mates stayed out of school due to lack of money to buy food.

The GNA observed that some schools had two caterers assigned to each, a situation which led to duplications and some pupils getting more than one pack.

Schools, including SOS-Hermann Gmeiner International College, Deks, Community Eight Number Two were among schools who were assigned to more than one caterer.

Mr Mark Kwabena Afful, Tema Central Organizer, New Patriotic Party (NPP), who came to Deks with other party officials to present them with food, was told that the pupils had received their share already.

Mr Afful told the GNA that the feeding project were given to either the party’s parliamentary candidates or local member of Parliament to coordinate, adding that all the caterers for the project were placed under the women’s organizers.

He said he did not understand why other people were also presenting the schools with food, indicating that if the Tema Metropolitan Assembly officials had also assigned their own caterers, they must inform the party team accordingly.

Mr Robert Tetteh, School Feeding Desk Officer, at the TMA, said the issue would be addressed, stating that the existing caterers for the school feeding programme were being used while additional ones had been recruited.

Mr Tetteh indicated that each caterer pre-financed the Gh¢3.50 per head cooking to be reimbursed by government.

He added that there was the challenge of the number of staff for each school as their number fluctuated, a situation he said needed to be addressed as some of the caterers were not sure if they would be paid for the extra work they put in on those unusual days.

Mrs Agartha Adrah, School Health Education Programme (SHEP) Coordinator for the Tema Metropolitan Education Directorate, who monitored the food sharing, expressed satisfaction and reiterated the need to properly coordinate it to prevent confusion among the caterers.

Mrs Adrah called on school heads especially, the private schools to allow access to their premises for monitoring to ensure that the right thing was done saying, Datus International School refused her team access with the excuse that officials were not available.

Posted by Mlimore - May 20, 2019 0
Billionaire tech investor Robert F. Smith announced Sunday his family was creating a grant to pay off the debt of…

Posted by Mlimore - May 10, 2019 0
Dr. Matthew Opoku Prempeh, the Minister of Education, has revealed his readiness to put into action, educational policies and programmes… 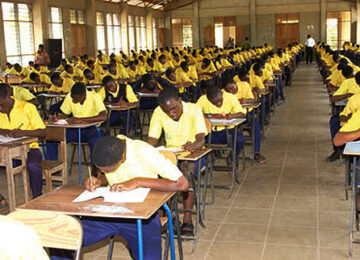 Posted by Mlimore - March 19, 2019 0
The facility expansion project, which forms part of the $40-million additional financing from the World Bank under the Secondary Education…