The scholarship awardees were selected based on merit out of more than 900 applicants through interviews, which were conducted by a six-member committee made up of representatives from the Scholarship Secretariat, Ministry of Health, GNPC, MoFARI, Ministry of Education and Cuban Representative.

The GNPC scholarship package covers cost of tuition, accommodation, feeding, medical insurance, book allowance and monthly living expenses of the 200 awardees, 52 of them have already gone to Cuba to start their studies.

In addition, 50 more would be leaving Ghana for Cuba by the end of the week. The rest are also being prepared to leave for Cuba in batches within the month of May.

Mr Kwaku Agyaman-Manu, Minister of Health at a farewell meeting with the awardees in Accra urged them to be disciplined, hardworking and to obey rules and regulations.

He encouraged the students to take their six months study of the Spanish Language very seriously, since they were going to be taught in Spanish for the duration of their studies.

Mr Agyemang-Manu, who reminded the students that their main purpose of going to Cuban was to study, also advised them to return home to serve mother Ghana after their studies.

Dr Dominic Kwesi Eduah, the President of the GNPC Foundation, said the Foundation would monitor the assessment of the awardees in Cuba before payments would be made for the scholarships.

He told the students that as GNPC scholars, there were a lot of expectations from them, adding that, “You should see yourself as different students when you are a GNPC scholar. Standout in everything you do as a GNPC scholar,” he said.

“I will urge you to have the confidence. And I know in eight years time or less than that, you will be here to serve your Mother Ghana.”

Dr Eduah also urged them to count themselves getting involved in building Mother Ghana.

Mr Pedro Luis González Despaign, the Cuban Ambassador to Ghana said this year was very significant, because it marks 60 years of diplomatic relations between the two countries.

The Ambassador advised the students to be disciplined, hardworking and focused on their studies.

Madam Florence Akunor, Director, American Bureau, MoFARI also urged the students to put in extra efforts in learning Spanish, so that it would facilitate their learning.

“Take your studies seriously. To whom much is given, much is expected,” she added.

Dr Hafeze Adam, Coordinator of Cuban Medical Brigade urged the students to make good use of their stay in Cuba; stating that, “you have no reason to fail”.

Posted by Mlimore - March 15, 2019 0
The Carnegie Corporation of New York, a charity organisation, held an interactive session in Accra yesterday with beneficiaries of its…

KNUST sets up treatment and isolation centre, as Universities re-open

Posted by Mlimore - June 16, 2020 0
The Kwame Nkrumah University of Science and Technology (KNUST) has set up a treatment and isolation centre to help respond… 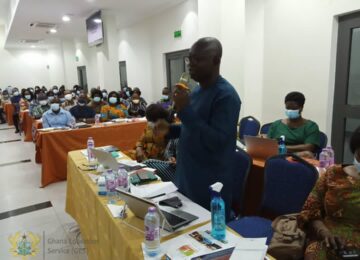 Posted by Mlimore - March 17, 2021 0
The Management of the Ghana Education Service has organized a virtual meeting with heads of the Second Cycle institution about…

Posted by Mlimore - April 20, 2019 0
The Otumfuo Education Fund which has been in existence for about 20 years has been a game-changer in the transformation…

Posted by Mlimore - February 21, 2019 0
The government has made available GH¢55,278,500 to provide incentives for teachers to offer extra tuition to all senior high school…