The Ghana Education Service (GES) has condemned the alleged murder of the Headmaster of Salvation Army Basic School at Asiakwa in the Eastern Region. George Somuah Bosempem was reportedly murdered recently by a gang of ‘wee smokers.’

The deceased was also the Religious and Moral Education Teacher as well as Ghanaian language teacher for the school.

He is believed to have been beaten mercilessly on Saturday May 4, by the suspects who were smoking in his backyard.

That was after he reportedly warned the suspects to desist from engaging in antisocial activities.

The suspects have been remanded into police custody.

GES in a statement signed by its Director-General, Prof. Kwasi Opoku-Amankwa, has expressed its sympathy to the widow and three children as well as the entire family of the late Headmaster.

Posted by Mlimore - April 17, 2019 0
A workshop which brought together Examination Coordinators, Guidance and Counselling Officers, PROs and other major Stakeholders of Education was organized…

Posted by Mlimore - April 3, 2020 0
The Ministry of Education in collaboration with the Ghana Education Service (GES) and Ghana Broadcasting Corporation (GBC) has released the… 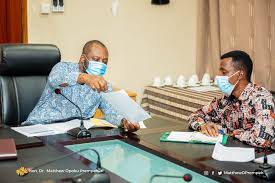 Posted by Mlimore - September 14, 2020 0
The Ministry of Education has explained that a recent meeting it held with private schools in Ghana was not aimed…

Nduom School of Business gets accreditation to run four Diplomas

Posted by Mlimore - April 28, 2019 0
The National Accreditation Board (NAB) has given accreditation to the Nduom School of Business and Technology, to run four Diploma…